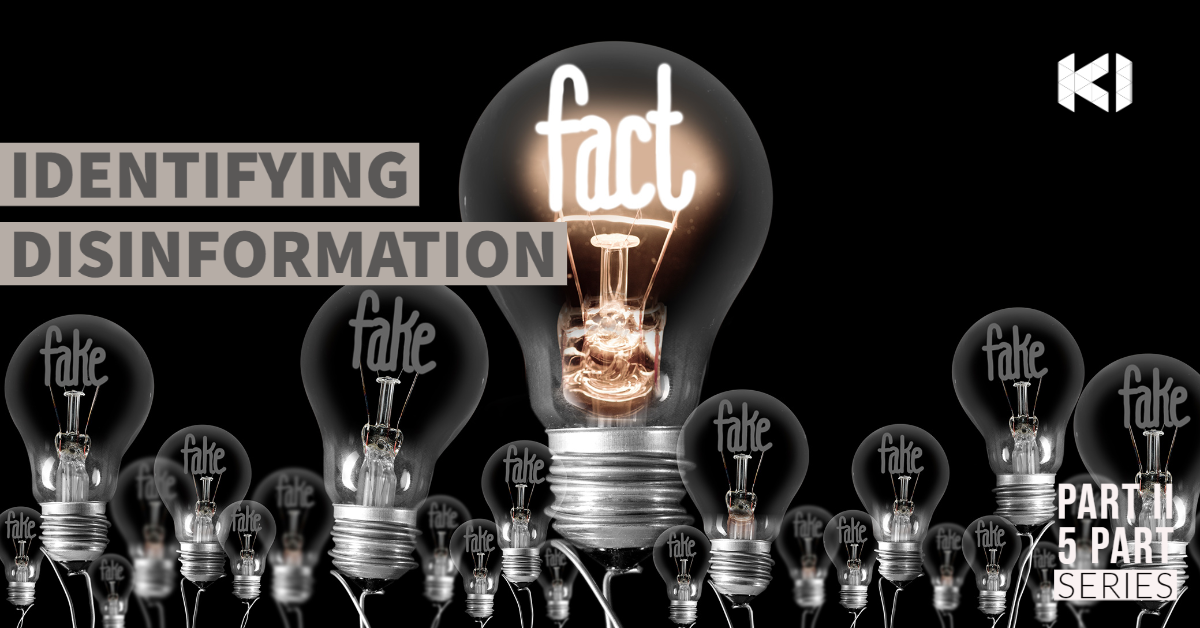 Using AI to track disinformation during an election campaign.

How can online disinformation be identified and tracked? KI Design provided social media monitoring solutions for the 2019 Canadian federal election.[1] KI Social is a suite of tools designed to support three main areas of Electoral Management Board (EMB) electoral monitoring as it pertains to social media:

Political financing issues: This can be divided into two main categories:

Online voter discourse occurs in waves. It generally peaks in the event of any significant political incidents, and around election milestones such as:

How Disinformation Impacts Elections, and Voters

Disinformation undermines democracy. That’s its purpose. Usually extreme in nature, fake news polarizes people, creating or exacerbating social and political divisions, and breeding cynicism and political disengagement. Even the reporting of disinformation campaigns (Russian electoral interference, for example) adds to the destabilization, making people wary of what to believe.

“Over the past five years, there has been an upward trend in the amount of cyber threat activity against democratic processes globally…. Against elections, adversaries use cyber capabilities to suppress voter turnout …”[2]

Disinformation campaigns often focus on election processes. The aim is to lower voter turnout, by preventing people from voting, or simply by making them less inclined to do so. This can play out in different ways.

Below, I list examples of some of the topics of disinformation, taken from posts from different countries, that can be found in the social media universe during an election period.

Making it harder for people to physically vote

False information gets spread about the location of a polling station, or its hours of operation, or power outages on site causing long line-ups. Fake news like this creates confusion, making people less likely to vote.

Undermining voter trust in the EMB 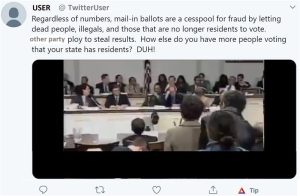 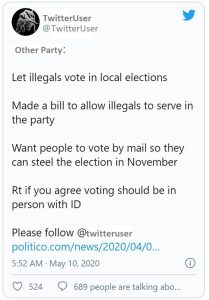 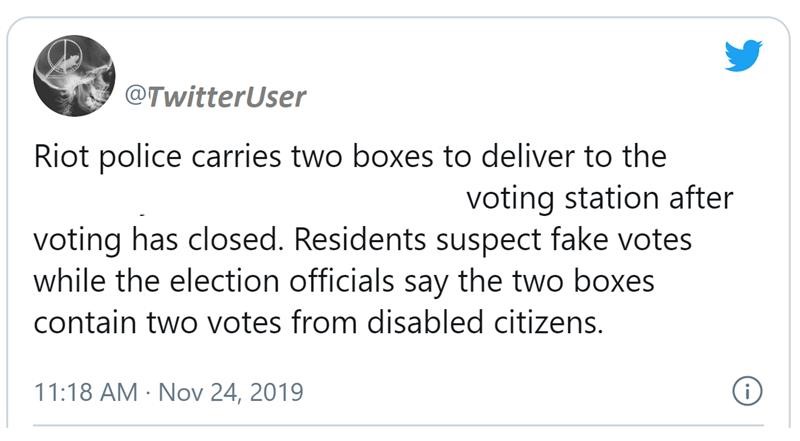 This was fake news – no-one can vote in a federal election in Canada unless they have become a citizen. Other posts criticized the government for allowing prisoners to vote, even though this is a well-established right under the Canadian Charter of Rights and Freedoms. Both these types of posts foster a sense of disenchantment with “the system.”

Other sources of disinformation include:

Identifying Disinformation, and Those Who Disseminate It

In monitoring elections, the social media analyst is confronted with an enormous amount of data. The key to accessing and interpreting that data is the keywords and queries the analyst chooses to use. To be effective, these must be shaped by a close understanding of the political context. This process is “highly selective,” notes Democracy Reporting International. “It is not possible to have a comprehensive view of what happens on all social media in an election. Making the right choices of what to look for is one of the main challenges of social media monitoring.”[4]

To help circumvent this challenge, the KI Social platform:

When analysts track disinformation, they usually have preconceived ideas of what it will look like. EMBs are very familiar with mainstream media, and how to track potential disinformation within it (false claims by politicians, for example). Traditional manual modes of monitoring rely on this history of prior examples, and require that human monitors read and analyze every single post to decide whether it’s disinformation.

Some EMBs expand their capabilities by leveraging automated tools. However, standard automated data queries are still based on prior examples and thus are error prone.

A third way of tracking disinformation is via AI-based tools. Such tools avoid these pitfalls by allowing the analyst to track unprecedented volumes of data, as well as its location and context and the sentiment being expressed. Negative emotion is key, as it is the main determinant for disinformation.

The diagram below illustrates how KI Social’s methodology can be used by EMBs to track disinformation. 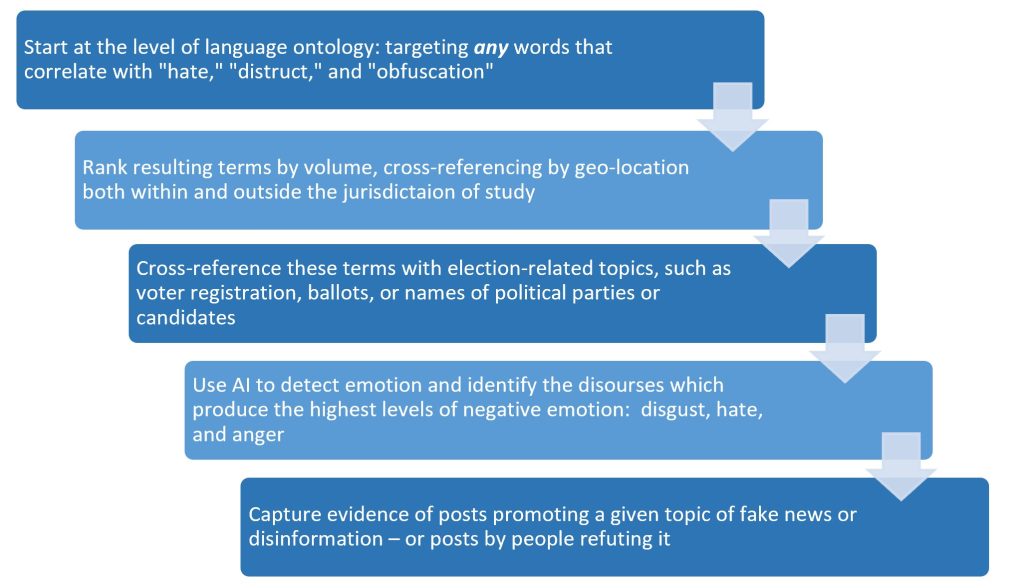 Removing unwanted data is conducted at every stage of the process (for example, if analysts are studying an election in France, and there are elections in Ivory Coast at the same time, the Ivory Coast data will need to be filtered out of the results).

Disinformation can be expressed as an algorithm:

Animated by these queries, KI Social provides the ability to answer the following questions:

[1] This article reflects the views of KI Design, and not those of Elections Canada. The full report on how Elections Canada uses social media monitoring tools, including those created by KI Design, in the 2019 federal election can be found here: Office of the Chief Electoral Officer of Canada, Report on the 43rd General Election of October 21, 2019: https://www.elections.ca/res/rep/off/sta_ge43/stat_ge43_e.pdf.

[3] All the posts below are in the public domain; nevertheless, we have removed the identity of the poster in the screenshots we provide.

With a US election campaign ramping up, many people around the world are paying attention to the impact of misinformation and disinformation on democracy. Electoral...
Political parties in the United States, and the rest of the world, know fake news to be a threat to democratic process. News media often...
Monitoring Online Discourse During An Election: A 5-Part Series How to monitor social media with AI-based tools during an election campaign  Traditional election monitoring is...
Monitoring Online Discourse During An Election: A 5-Part Series The advantages of managing election logistical issues through social media. Organizing the logistics of an election...
PART I: INTRODUCTION Online interference with elections is a reality of 21st century politics. Social media disinformation campaigns have targeted citizens of democracies across the...